Network Foundation Technologies, LLC (NiFTy), founded and headquartered on the campus of Louisiana Tech University, has received the prestigious Tibbetts Award from the U.S. Small Business Administration. The Tibbetts Award is presented to those small businesses and individuals judged to exemplify the best in the Small Business Innovation Research (SBIR) program.  SBIR is a highly competitive program that encourages small business to explore their technological potential and provides the incentive to profit from its commercialization. NiFTy was honored for its television-style Internet broadcasting technology, which is based on distribution capabilities that allows the computers and Internet connections of other viewers watching a broadcast to help deliver that video content to other viewers.  This significantly reduces many of the current bottlenecks which limit widespread online viewing and can decrease average broadcaster bandwidth costs by up to 75 percent. “NiFTy has made great strides with the funding provided by the Small Business Innovative Research program through the National Science Foundation,” said Marcus Morton, president and co-founder of NiFTy. “The assistance given to our business has made a critical difference in helping us achieve our vision of dramatically reducing the cost of online broadcasting.” 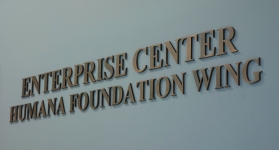 From its genesis, NiFTy has had deep roots in Louisiana Tech’s innovation and commercialization enterprise.  Morton, along with company co-founder Dr. Mike O’Neal, NiFTy’s chief scientist and a professor of computer science at Tech, saw an opportunity to use their Louisiana Tech educations along with the business support and research resources of the University to develop a pioneering Internet streaming video technology that has gained international accolades and recognition. “NiFTy was the first online broadcaster to provide a full Free-For-View (FFV) model for a professional sports league, encompassing all team games for an entire season, provided at no charge to the viewer, made possible due to the cost saving technology,” said O’Neal.  “The Arena Football League (AFL) saw an online audience increase of greater than 50 times (5,000 percent) in just the first year after switching from a pay model to NiFTy’s FFV model.” Although established as a California LLC, NiFTy has used the Louisiana Tech Enterprise Center as its base of operations since the Center first opened its doors in 2005.  Louisiana Tech is also home to NiFTy’s Broadcast Operations Center from which live Internet video content for such professional sports organizations such as the AFL and Professional Bull Riders Association is broadcast to worldwide audiences. The long-term economic impacts of collaborative relationships like that of NiFTy and Louisiana Tech offers opportunities for other emerging business to pursue similar relationships and an attractive option for out-of-state start-up businesses looking to relocate to Louisiana. “In addition to facilitating improved access to Internet media content across the globe, NiFTy is helping build capacity in north Louisiana,” said Kathy Wyatt, director of Louisiana Tech’s Technology Business Development Center.  “From personally mentoring business startups to advocating for technology-based business development at the state and federal level, NiFTy’s leadership is helping advance the cause of entrepreneurship while growing their own innovative enterprise.” Many state leaders in Louisiana also consider NiFTy a model for how to successfully connect the entrepreneurial potential of a small business with the research and technical resources of a university like Louisiana Tech. “The SBIR program has opened doors for small businesses, entrepreneurs, and innovators working with the government and universities to develop cutting edge technologies,” said Senator Mary L. Landrieu (D-La.), chair of the Senate Committee on Small Business and Entrepreneurship.  “NiFTy is the perfect Louisiana success story, proving once again that our state’s scientists are among the leaders in technological advancement in America.” In addition to its broadcasting service, NiFTy provides good job opportunities for Louisiana Tech students and graduates, helping to stem the outflow of intellectual talent from the state and retain the next generation of technology entrepreneurs in Louisiana.  Today, NiFTy’s products and services are significantly impacting the way television-style broadcasting is conducted over the Internet and greatly increasing the number of voices that can be heard.  While NiFTy’s near term goal is “to bring television to the Internet”, the long term goal is to give ordinary citizens their own “online television stations.”