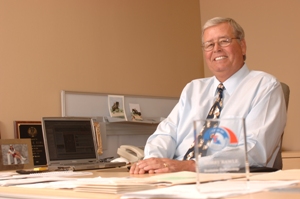 Rawle, a native of New Orleans and a 1971 graduate of Louisiana Tech, passed away on April 27, 2011 after a courageous battle with ALS (Lou Gehrig’s disease.) “Bobby Rawle was my friend and one of the finest individuals I have ever known,” said Louisiana Tech President Dan Reneau.  “His contributions to Louisiana Tech University were immeasurable, as were his contributions to life.  He will be sorely missed.” Rawle served as the director of research development at Louisiana Tech from 2003 to 2005, and was instrumental in renovating the former Lincoln Parish Library in order to launch the center that now bears his name.  He was named the Louisiana Tech College of Business’ Distinguished Alumnus for 2000 and received the coveted Tower Medallion as Louisiana Tech’s 2004 Alumnus of the Year. During a 2008 interview for a feature article in Louisiana Tech’s alumni magazine, Rawle said, “I had a great time [at Louisiana Tech], made long lasting friends and fell in love with a school that, somehow, in spite of me, was able to help me have a very fulfilling life.  Whenever I think of Louisiana Tech, it makes me smile.” The Robert H. Rawle Enterprise Center houses Louisiana Tech’s technology business incubator and the Technology Business Development Center.  As the primary business support and development outreach arm of Louisiana Tech, the Center is designed to facilitate and promote the growth of new and existing ventures of the innovation enterprise in the I-20 corridor of north Louisiana. “Bobby played a crucial role in developing the facilities to serve as the home for our start-up companies,” said Dr. Les Guice, vice president for research and development at Louisiana Tech.  “But he also brought a tremendous business and entrepreneurial acumen that inspired our students and faculty to step out and form companies.  Bobby was a great inspiration to me and the entire Tech family.” Prior to returning to Louisiana Tech, Rawle spent most of his professional career with J. Ray McDermott, Inc. of Houston, serving as a Senior Operations Manager, Division Manager, Vice President of Domestic Operations, and Vice President for North, Central and South American Operations.  He served the company as its President and CEO from 1997 to 2002. Rawle also held seats on Louisiana Tech’s College of Business Advisory Board, University Foundation Board, and the Research Foundation Board.