A Louisiana Tech business professor recently presented research to faculty and graduate students at Kühne Logistics University in Hamburg, Germany as part of their Research Seminar Series. Rebecca J. Bennett’s presentation was titled “The Impact of Perceived Job Alternatives: Examining the Destructive Effects of Work Frustration and Turnover Intentions on Employee Deviance.”  Bennett is a professor in the management and information systems department in the College of Business. She discussed the counter-intuitive findings of recent research undertaken with colleagues Marie Mitchell of the University of Georgia and Craig Crosley of the University of South Florida. Based on a concept called reactance theory, they predicted that individuals who were frustrated at work and wanted to quit, but who felt “stuck” in their jobs, were more likely to engage in counterproductive behaviors at work than those who thought they had more job alternatives. 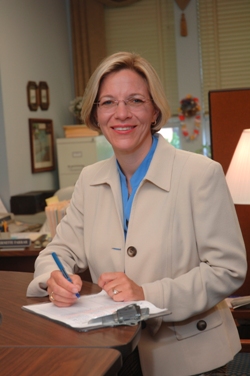 Their findings revealed that those who felt stuck perceived that they had few job alternatives. An analysis of survey responses of 200 anonymous employees supported their predictions. Practical implications of the findings were suggested by the German and Dutch scholars in attendance. They suggested that companies might choose to provide executive recruitment services for employees so that they were aware of job alternatives if they were dissatisfied. As part of the visit, Bennett was also invited to give a public presentation titled “Forgiving Offenses in the Workplace:  Differing Motives and Their Results on Employee Well-being.”  In that presentation, she talked about research she recently had published in the Journal of Occupational Health with coauthors Susie Cox  of McNeese University, Thomas Tripp of the University of Washington, Vancouver and Karl Aquino of the University of British Columbia. Since some of the motives for forgiveness resulted in greater stress or poorer health, she said the audience was curious about the finding that perhaps forgiveness isn’t always a good thing.  Bennett explained that the self-defined forgiveness respondents described was often not “true forgiveness” but rather forced reconciliation because of the work environment. Written by Reginald Owens – regowens@latech.edu